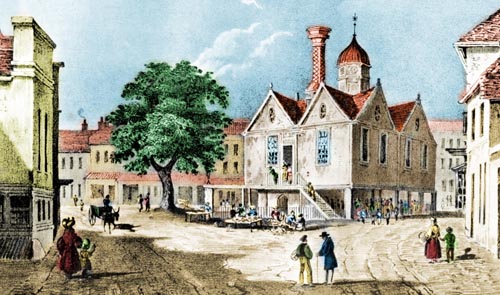 Historically, Berkshire has been bordered to the north by the ancient boundary of the River Thames. However, much of the border with Oxfordshire for the western part of the county was moved in 1974.

Alfred the Great was born in Wantage, previously in Berkshire but now in Oxfordshire. The Great Western Railway reached Didcot in 1839. MG (part of Morris Motors) was founded in Abingdon in 1929.

The Vale of White Horse and parts of Oxfordshire south of the River Thames were previously part of Berkshire, but were lost to the county in 1974. Conversely, the Slough area north of the Thames was historically part of Buckinghamshire, but was transferred to Berkshire in 1974.

During the Heptarchy Berkshire formed part of the kingdom of Wessex, and interesting relics of Saxon occupation have been discovered in various parts of the county. Of these the most remarkable are the burial grounds at Long Wittenham and Frilford, and there is evidence that the Lambourn valley was occupied in early Saxon times. The cinerary urns found in Berkshire undoubtedly contain the ashes of the Anglians who came south under Penda in the 7th century. The fortification called Cherbury Castle, not far from Denchworth, is said to have been first made up by King Canute.

At the time of the Norman Conquest Berkshire formed part of the Earldom of Harold, and supported him staunchly at the battle of Hastings. This loyalty was punished by very sweeping confiscations, and at the time of the Domesday survey no estates of any importance were in the hands of Englishmen. When Alfred the Great divided the country into shires, this county received the name of Berrocscir, as Asser says, “from the wood of Berroc, where the box-tree grows most plentifully”. At the time of the survey it comprised twenty-two hundreds; in 1911 there were only twenty, of which eleven retain their ancient names. Many parishes have been transferred from one hundred to another, but the actual boundary of the county is practically unchanged. Part of the parishes of Shilton and Langford formed detached portions of the shire, until included in Oxfordshire in the reign of William IV. Portions of Combe and Shalbourne parishes have also been restored to Hampshire and Wiltshire respectively, while the Wiltshire portion of Hungerford has been transferred to Berkshire. The county was originally included in the see of Winchester, but in A.D. 909 it was removed to the newly formed see of “Wiltshire”, afterwards united with Sherborne.

If you want to get to know history and visiting places of Berkshire just Book a taxi from national airport links and you will get a premium and quality service from the best and cheap taxi service then you can move around Berkshire easily and in a very affordable price .